The shareholders of Climeon AB (publ) held on Thursday on the 16th of May, 2019, the Annual General Meeting in Stockholm. The following is a summary of the most important decisions made at the meeting.

Board of Directors
The AGM decided to re-elect Per Olofsson, Thomas Öström, Stefan Brendgen, Olle Bergström, Vivianne Holm and Therese Lundstedt as Board members. Per Olofsson was re-elected as Chairman of the Board at the statutory Board meeting held in connection with the AGM.

Presentation by the CEO
In the presentation Climeon AB’s CEO Thomas Öström and CFO/deputy CEO Christoffer Andersson commented the business development during 2018 and Q1 2019.

Approval of the implementation of an incentive program for employees
The AGM decided to approve an incentive program for employees encompassing up to 800,000 warrants. Each warrant entitles to subscription of one new B share in the company at a price corresponding to 175 percent of the volume weighted average price listed for the company’s shares at First North Premier 20 trading days prior to 1 June 2019. A premium equal to the warrant's market value calculated according to the Black & Scholes valuation model shall be paid for each subscribed warrant. 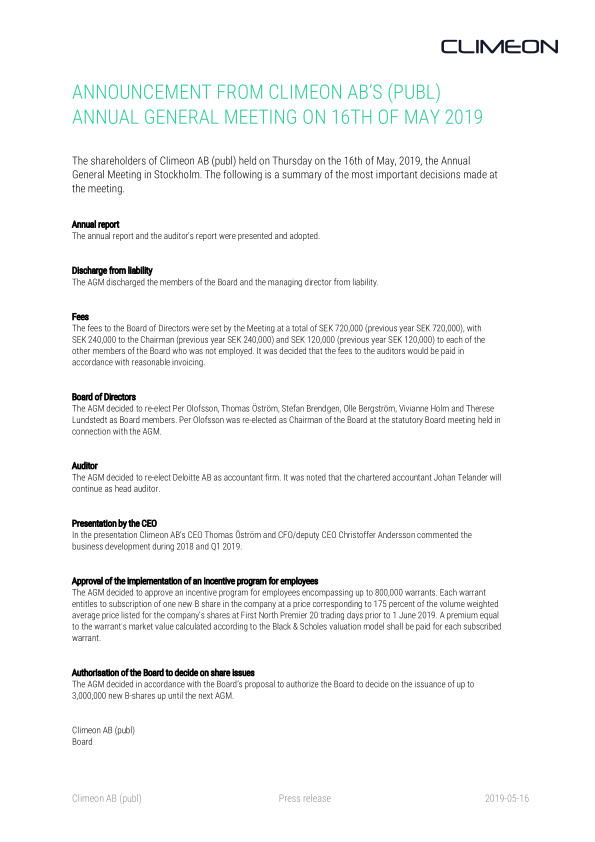 Announcement from Climeon AB’s (publ) Annual General Meeting on 16th of May 2019
SHARE THIS ARTICLE
Manage Cookie Consent
To provide the best experiences, we use technologies like cookies to store and/or access device information. Consenting to these technologies will allow us to process data such as browsing behavior or unique IDs on this site. Not consenting or withdrawing consent, may adversely affect certain features and functions.
Manage options Manage services Manage vendors Read more about these purposes
View preferences
{title} {title} {title}