You are probably aware of the fact that the gifts you bought for your loved ones this Christmas was transported at sea around the globe before landing under your now thrown out Christmas tree. Transportation that leads to emissions of CO2. Climate change is already affecting our lives today and this impact will increase with the passing of time. Our children and grandchildren will be disappointed when places that we can visit today no longer exist. That will suffer for our short sightedness which will leave our beautiful planet in a filthy state for future generations to clean up. Places, such as Isle de Jean Charles in southeastern Louisiana, are now classified as unfit to live in due to flooding caused by climate change. Also, animal species, both at land and at sea are extinct or endangered, causing a real threat to our planet’s ecosystem.

It simply does not feel right. As we begin 2017 we must find more efficient ways to transport goods. Previous technologies that could reduce emissions on ships and vessels were not profitable, nor efficient enough for companies to invest in them.

Now cleantech companies are making their technologies so affordable that you can make money by using them, without reliance on subsidies. Solar, wind and heat power technologies are all increasing in efficiency and dropping in price.

What is heat power? More than 50% of all energy in the world is lost as waste heat. Most of this excess heat is lost in the temperature range of 50-120 degrees Celsius. This excess heat is coming from areas such steel plants, aluminum plants, ship engines, power plants etc. Currently poured into our oceans or dumped out into the atmosphere through our chimneys. Heat is also available from renewable sources, especially geothermal heat, allowing electricity production based on the heat found a few thousand meters down.

Back to our Christmas example, more than 120 million containers are transported on 4 000 ships each year. Heat power solutions are currently being rapidly deployed on ships around the world with the potential to reduce the container fleet emissions by 1 billion kg of CO2 each annually. This is the equivalent to removing 210 000 cars from our roads each year.

The global warming rescue will likely come from three things:

– Consumers putting pressure on the big companies to take the lead in being green, also including the transportation of goods.

– Governments accelerating the turnaround by establishing new laws punishing emissions of CO2 and making the use of fossil fuels very expensive. 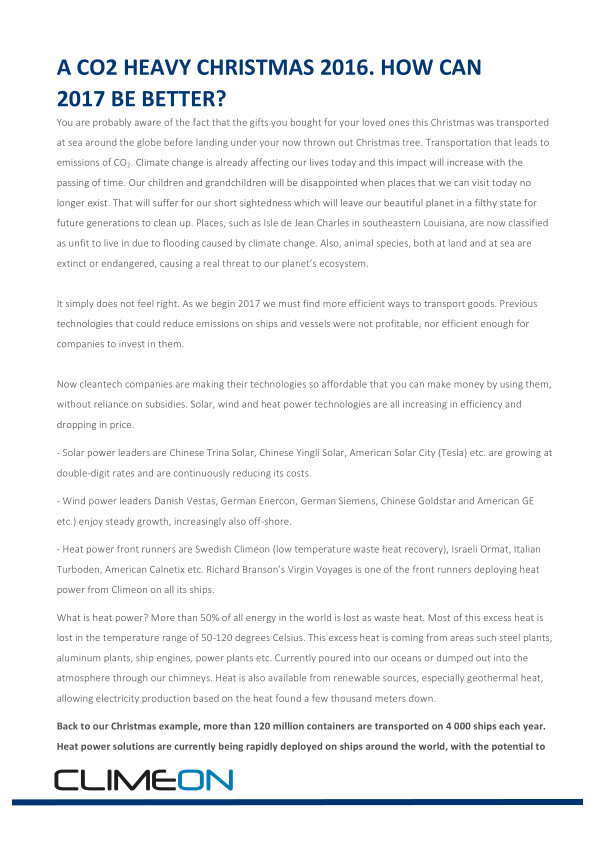 Pressrelease How Can 2017 Be Better?
SHARE THIS ARTICLE
Manage Cookie Consent
To provide the best experiences, we use technologies like cookies to store and/or access device information. Consenting to these technologies will allow us to process data such as browsing behavior or unique IDs on this site. Not consenting or withdrawing consent, may adversely affect certain features and functions.
Manage options Manage services Manage vendors Read more about these purposes
View preferences
{title} {title} {title}