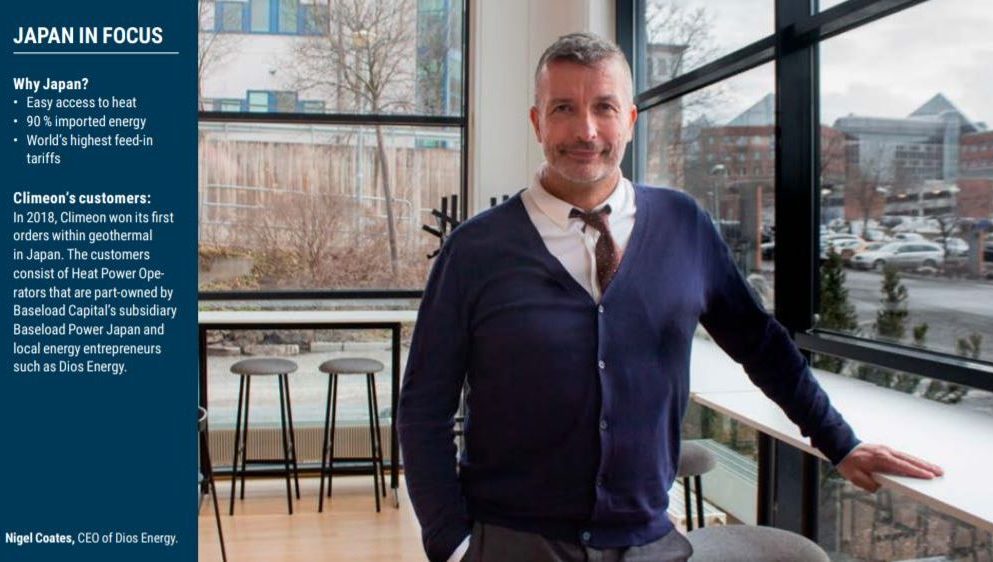 Japan – A fantastic opportunity for all involved

A difficult energy situation, high electricity prices and lots of easily accessible hot water makes Japan one of Climeon’s most prioritized markets. In 2018, Climeon received its first orders within geothermal heat power in Japan. Now, Climeon is getting ready to deploy power plants in Japan together with customers Baseload Power Japan and Dios Energy.

Since the nuclear disaster in Fukushima, the energy situation has changed drastically in Japan. Today, most of the country’s primary energy is imported and fossil. The need for locally produced renewable energy is huge.

Nigel Coates is the owner and CEO of Heat Power Operator Dios Energy and has lived in Japan for almost 30 years. – Because of the Fukushima disaster, many land and spa owners have lost almost everything. The need to find new sources of income is great and we can help by making use of the hot water, says Nigel Coates. With a past as an entrepreneur within solar power, as well as vast experience of structured finance and doing business in Japan, Nigel Coates and Dios Energy saw an opportunity to utilize Climeon’s technology to enter a new market within cleantech. – Japan is a great opportunity.

The potential for geothermal heat power here is the third largest in the world and the feed-in tariffs are high. I think this could change the energy landscape, says Nigel Coates.

Together with Baseload Power Japan, Nigel’s company Dios Energy owns Heat power operators Hayabusa Power and Iwana Power, which will set up their first power plants with Climeon’s technology in 2019. For Nigel, there were several reasons behind his choice to work with Climeon and Baseload Capital. – In Japan there is a resistance to large buildings and solar cell parks that look industrial and lack personality. In this, we differ from solar power because our units are small and contained inside buildings that fit into the surroundings, says Nigel Coates.

– The most important thing for me is to work with people who share my values, who are honest, want to do the right thing and help people. I am happy to talk about Climeon and Baseload Capital because I am absolutely certain that we are not hurting anyone or harming the environment, concludes Nigel Coates.