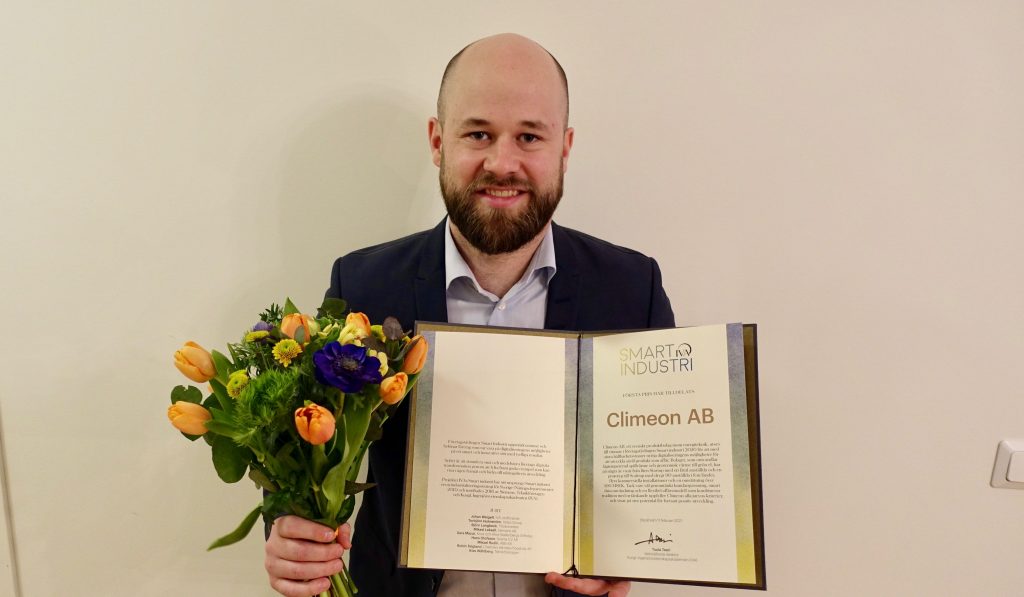 Climeon has today won first prize in the Smart Industry competition, awarded by the Royal Swedish Academy of Engineering Sciences (IVA). Climeon is awarded for its work with the software solution Climeon Live, which enables smart control and monitoring of the company’s power plants worldwide.

– We are very proud to receive the Royal Swedish Academy of Engineering Sciences’ award for Smart Industry. It feels extra great that it is our IT strategy and IT platform that is praised, as they make a big difference for our customers, but are not always visible to the outside world, says Rikard Pettersson, Head of Software Development at Climeon.

Climeon has today been named the winner of the business competition Smart Industry, awarded by the Royal Swedish Academy of Engineering Sciences (IVA). Climeon is awarded for its work with the cloud-based platform Climeon Live, which collects real time data from the company’s installations and enables remote monitoring and control of the power plants.

– Software has always been an important part of our core business. Especially when it comes to the control systems of the machines. We have solved many challenges with software and smart algorithms instead of with hardware, says Rikard Pettersson, Head of Software development at Climeon.

The jury’s motivation was:

Climeon AB, a Swedish product company within energy technology, is named the winner of the business competition Smart Industry 2020 for using digital opportunities to develop both product and business with great sustainability gains. Thanks to well-thought-out customer adaptation, smart data use and a flexible business model that combines tradition with innovation, Climeon meets all the jury’s criteria, and shows great potential for continued positive development.

The Smart Industry competition was established in 2016 by Siemens, the Association of Swedish Engineering Industries and the Royal Swedish Academy of Engineering Sciences (IVA) to draw attention to and reward companies that take advantage of the possibilities of digitalization in a smart and innovative way with clear results. The first prize is a tailor-made international knowledge trip arranged by IVA in collaboration with the German-Swedish Chamber of Commerce.