Everyone is well aware of the need for renewable power, but people aren’t always aware of where renewables are most needed. As our focus is continually drawn to the environmental impact of electricity production, the largest global energy end use is routinely overlooked: heat.

According to the IEA’s Renewables 2021 report, heat accounts for ‘almost half of global final energy consumption’.  From completing industrial processes to keeping residential homes warm, nearly 50% of the world’s energy use relates to some form of heating, and accounts for 40% of energy-related CO2 emissions (BBC, 2020).

Despite this, the supply of heat is still heavily dependent on fossil fuels. In recent years, less than a quarter of the world’s heat supply and just 23.1% of the EU’s energy heating and cooling has come from renewable sources. Worse still – the use of renewables for heat supply has remained static for the last 30 years (IEA, 2021). 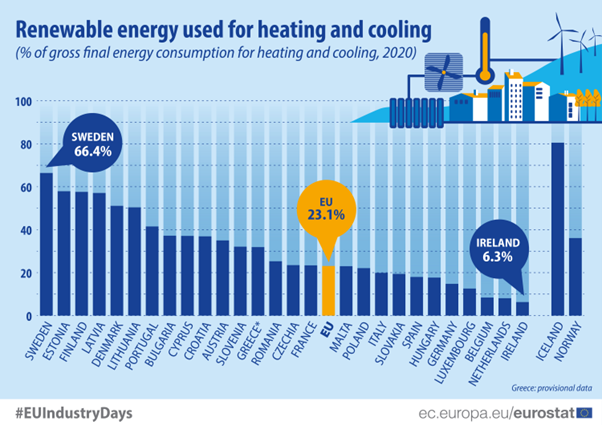 It’s evident, therefore, that transitioning to renewable heat will drastically reduce worldwide CO2 emissions and accelerate our journey towards a net-zero future, but what’s the best option for generating renewable heat and why is this vital component of sustainability so often overlooked?

What is Renewable Heat?

Simply put, renewable heat is heat that’s generated from renewable power sources. So, when we supply heat to factories, offices and houses, we need to ensure that this heat is produced from renewable sources to prevent environmental harm.

To heat commercial and residential buildings, we generally rely on heat in two forms: hot water and hot air. Either we use central systems that carry hot water through pipework to heat the internal area or we pump hot air into a specific area until the desired temperature is reached.

Typically, the heating and/or the transportation of this hot water and hot air is achieved via the use of non-renewable sources. A boiler which ignites gas or oil to heat water relies on fossil fuels, for example. Alternatively, the electricity used to power a portable space heater may be generated via gas or coal power stations, again relying on fossil fuels to deliver heat.

Instead of using these fossil fuels to provide us with heat, we can take a major step towards a net-zero world simply by switching to renewable power. By using renewables to meet the global demand for heat, we have the opportunity to reduce worldwide CO2 emissions by a staggering amount.

How Does Geothermal District Heating Work?

District heating systems are widely used throughout the world and provide heat to buildings via a network of insulated pipes. When these pipes are filled with hot water, the buildings on the district network can be heated, with each building being fitted with its own radiators and thermostats to moderate the temperature.

To power district heating systems in this way, hot water from a geothermal source is routed to a pumping station before being distributed through insulated pipes to any buildings on the network, including industrial complexes and residential homes. 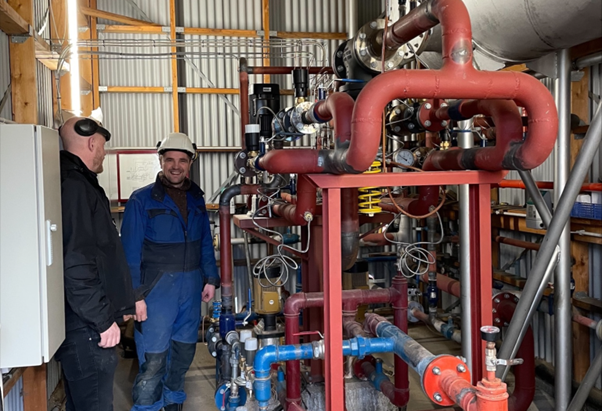 Many geothermal sources produce heat that’s hotter than it needs to be within a district heating system, which means that there is plenty of supplementary heat available for electricity production.

By incorporating Climeon HeatPower modules at existing geothermal district heating sites, for example, plants can produce renewable electricity as well as renewable heat and significantly increase their productivity and profitability.

Where Can Geothermal District Heating Be Used?

Geothermal power is available under every part of the earth, but its accessibility depends on the location and well depth. In some regions, accessing high temperature thermal energy requires extensive drilling, which means complex technology and construction projects are needed.

But the potential doesn’t stop there because Climeon’s low temperature ORC technology further increases the accessibility of geothermal power. Our HeatPower 300 system enables thermal energy to be converted into electricity at a lower temperature than non-ORC waste heat recovery systems, which means a higher number of geothermal district heating plants can incorporate clean electricity production into their operations.

As a result, Climeon’s HeatPower technology can be used to generate clean electricity in many locations where geothermal district heating is already being used but electricity production has been unachievable, thus optimizing plant outputs, producing another source of revenue for site owners and reducing CO2 emissions even further.

Providing residential homes in Flúðir with renewable heat, the installation of Climeon’s WHR technology ensured that the plant could also product clean electricity. Following a subsequent expansion in 2021, we installed additional modules to increase power production from 600kW to 1,200kW. 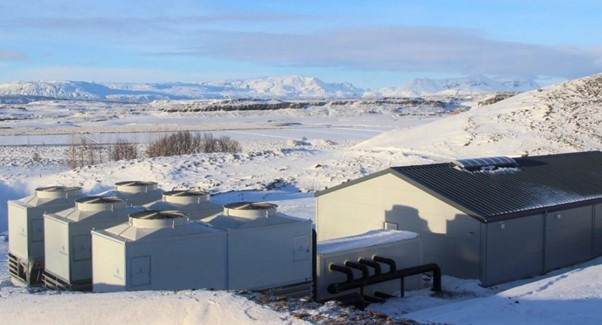 The success of the project led to another Varmaorka geothermal plant being established in the historic town of Reykholt. With 300kW power output and geothermal hot water supporting the existing district heating network, the local village, hotel and farms have easy access to clean, renewable energy and heat.

The true potential of geothermal energy is slowly being realized and an increasing number of regions are tapping into underutilized resources. Of course, choosing the right technology to underpin your geothermal project is critical to success. With modular and scalable solutions, Climeon HeatPower modules provide flexibility as well as optimal functionality and performance when it comes to geothermal electricity and heat production.

To learn more about Climeon’s HeatPower system or to discuss an upcoming project, contact our team now.